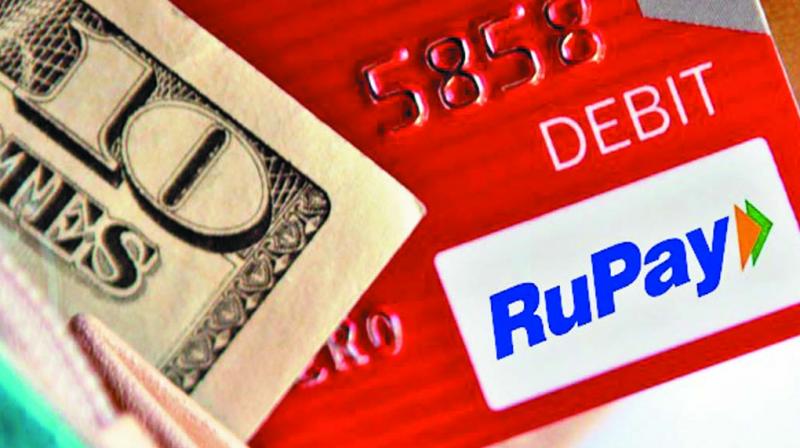 Hyderabad/Mumbai: Despite the government’s push for card payments, banks do not appear to be eager to promote cashless transactions as they continue to insist on issuing high-cost Visa and Mastercard debit and credit cards to their
customers by default.

“After reading about the RuPay card, I had requested my bank to issue it in place of Visa card. However, my bank staff refused to accept my request as they claimed that RuPay cards are issued only to Jan Dhan or zero-balance customers,” said Raj Kumar, a private employee.

Visa and MasterCard are two US-based card payment processing companies. Indian banks have been using these cards as they did not have a domestic alternative. However, RBI had asked IBA and NPCI to develop a domestic card processing system to replace costly foreign cards, which resulted in RuPay card.

Despite lower costs involved, banks have been issuing Visa and MasterCard cards to its regular customers by default. RuPay card has now come to be known as cheap version only for Jan Dhan or zero balance accounts, though its security features are equal to any foreign card and is accepted across the world at outlets using Discover cards. Most major countries have their own domestic card firms such as UnionPay in China, AsiaPay in Singapore, AllPago in Brazil.

While HDFC Bank (am-ong big private banks) has an option for a regular customer to choose, most banks do not allow a customer to decide whether he wants to opt for Visa or RuPay when he opens an account.

Enquiries with major public sector and private sector banks by this newspaper revealed that banks do not have any standard process or application form, which can be used by existing customers to switch from Visa to RuPay.

“Not having an application form is a major hindrance for the RuPay and card payments in a country where a mere writing of his or her name is considered a sufficient criterion to call him or her literate.”

Though there is no application form for this, public sector banks said customers can get their Visa cards replaced with RuPay by writing a letter to the branch manager. ICICI Bank said it issues RuPay card only to Jan Dhan account holders and not for regular account holders.

A dipstick survey by this newspaper found that one of the main reasons for small merchants’ reluctance to switch to card-based payments is the high transaction cost.

“We don’t want to have Point of Sale machine at our shop because it is costly to acquire and maintain. More importantly, we have to pay a two per cent transaction fee on every purchase to bank,” Raja Reddy, a local pharmacist, told this newspaper.

While the Point of Sale machine issued by banks is costly and would expect merchants to have a certain number of transactions every month, there are several companies which issue smaller Bluetooth-enabled card processing units that cost in the range of Rs 3,000 to Rs 4,000.

“Retail trade, where most cash transactions happen, has thin margins. For merchants, the two per cent transaction cost charged by Visa and MasterCard is prohibitive. The awareness about RuPay among merchants is also quite low. So banks must try to switch to RuPay card, which will enable more traders accept card payments,” said C. Kumtuba Rao, vice-chairman, Andhra Pradesh Planning Board.

According to A.P. Hota, CEO and managing director of National Payment Corporation of India (NPCIL), promoted by RBI and Indian Banks Association, said “Banks should not place restrictions on the issue of Rupay cards and should issue them on request from customer irrespective of his or her account profile.”
While Rupay cards are also equally good, banking industry sources added that the lack of awareness among customers and high brand value enjoyed by Visa and MasterCard coupled with their global acceptability are the main reasons why most of the banks are promoting Visa and MasterCards.